Joe Giglio Jr., chairman of the University of Louisiana at Lafayette Foundation Board of Trustees, issued the fo

When Ted Ralph’s successful oilfield sales job ended suddenly during the downturn of the 1980s, he was in his late 20s, had a house mortgage and was left wondering, “what do I do with myself now?”

Ralph wasn’t interested in a career in another industry. So, he opted to “gamble.” His hope was that the industry he loved would rebound while he earned a degree in petroleum engineering at UL Lafayette. “If you take no risks in life, you get nothing,” Ralph said of the decision.

The strategy paid off, in part because Ralph fell back on the work ethic he had begun cultivating at age 13. During summers and on weekends, he worked at his father’s tree removal and pruning company. At the same time, Ralph also learned the skills of a mechanic from his uncles while working on cranes, trucks and generators at his grandfather’s scrap business in New Orleans, where he helped run the office, too.

“I learned early, a big part of success is you simply have to outwork everybody,” he said.

Ralph, now 65, put that philosophy into practice when he returned to the University. To make ends meet, he worked as a roustabout on offshore oil rigs during summers. He also taught remedial math at the University during the fall and spring semesters.

Ralph, who earned a bachelor’s degree in education from UL Lafayette in 1976, had taught high school math for two years before entering oilfield sales. “That experience enabled me to get a job in the math department, and without it I would have had trouble finishing up in petroleum engineering. I’m still grateful,” he explained.

On Thursday, the University recognized Ralph for giving back to the department that hired him all those years ago. He was honored with a plaque in the University of Louisiana at Lafayette Foundation Hall of Honor for establishing the T.H. Ralph/BoRSF Endowed Chair in Mathematics through a bequest. 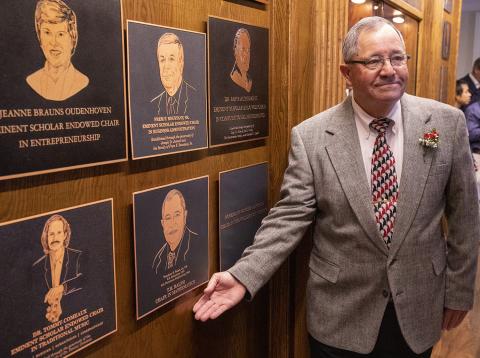 An endowed chair is created with a gift of $600,000, which is matched by $400,000 in state funds to create a $1 million endowment. The bequest will be made through Ralph's estate, and will create a lasting legacy for both him and the University.

Dr. Jaimie Hebert, the University’s provost and vice president for Academic Affairs, said the hundreds of plaques in the Hall of Honor signify many things, including scholarships, innovation, economic growth and opportunities for first-generation students to pursue higher education.

“And the plaque we unveil today will enable the University to attract and retain a world-class professor in mathematics who might have gone elsewhere had this line of support not been available,” Hebert said

Dr. Azmy Ackleh, dean of the Ray P. Authement College of Sciences, said the gift will also “impact the Department of Mathematics for years to come” and “compel students to explore their passion for math and research.”

For Ralph, the endowment is his “way of helping some other kid like myself have an opportunity to be successful.”

Ralph’s success as a petroleum engineer began in 1987. He parlayed his freshly minted degree into a career for a range of companies such as Arco and Shell, and for the U.S. government. Over nearly 30 years, he worked in every facet of the oil and gas industry, “literally from top to bottom,” he said.

Ralph, who lives in Mandeville, La., retired about three years ago, shortly after his dad died. He now spends his days caring for his aging mother, fishing and exercising – walking, lifting weights and golfing.

He’s also remodeling his house, doing most of the work himself.

“I could be paying someone to do it, but there’s no need for that. I’ll bring a couple of people in to help me along with it, but I’d rather just do most if it myself,” Ralph said.