To commemorate the organization's 50th anniversary, the Lafayette Bar Association has established a non-endowed scholarship for two incoming first-year students who will be studying at the University of Louisiana at Lafayette.

Josette Gossen, the Association's executive director, said the Association's current president, Maggie Simar, brought some of the Association's past presidents together to decide what they could do to celebrate the organization's anniversary.  She said they tossed around many ideas, and they quickly decided on a scholarship. They knew they wanted to award it to local students who would be committed to getting an education at UL Lafayette.

Both Gossen and Katelyn Guidry, the Association's marketing coordinator, said it was great seeing the past presidents come together and make a quick decision.

"It was like a family reunion where everyone was happy to see each other and just be here," Guidry said.

This is a University-wide scholarship, meaning the recipients can major in anything. Gossen said the past presidents felt strongly that the scholarship should be open to any student. They recognized that people from lots of professions could have a lasting impact on Lafayette's community, and attorneys are just one piece of the puzzle that makes the community work.

"We want to award someone who will bring whatever skills and talents they have as they move through college and eventually come out into the workforce and help Lafayette grow," Guidry said. 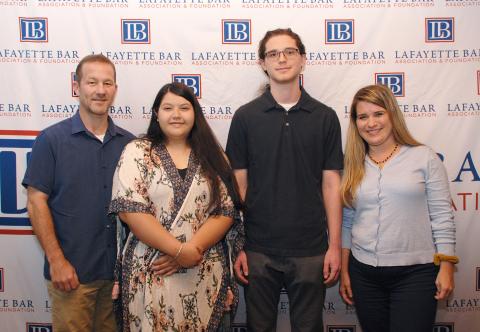 According to the Association's website, in 1969, what had been a loosely knit informal group of attorneys, formalized into the Lafayette Parish Bar Association by the filing of a charter signed by all 83 lawyers who practiced in the parish. By 1987, with the assistance of Acadiana Legal Services, the Lafayette Volunteer Lawyers program became a reality, and the Lafayette Bar hired its first staff member. Gossen said this was when things began to change exponentially, programs began to grow, more services were offered, and things began to expand. By 1989, there was still no office for the organization.

"We jokingly referred to the organization as 'a bar in a box' at that time because whoever was the president of the Association would hand off a box of records to the next president year after year," Gossen said.
The Association was first housed in the old Moss Pharmacy building on the corner of Jefferson and Vermilion Streets.  In January 1991, the association moved to larger quarters in what was then the FNB Towers, a space suitable to accommodate the Lafayette Law Library and three staff members. Recognizing the need for larger accommodations to supply the room necessary to serve its membership, in 2007, the Foundation purchased and began renovations of a highly visible building on Johnston Street, and that is where the Association is housed today.

"I can think of no better way to celebrate the 50th anniversary of the LBA than our being able to provide these two very deserving individuals with financial assistance for their next step in life," said Association Board Member Greg Koury via the Association's website. "Many thanks go to our past presidents and other donors for making this possible. The LBA should also be grateful for the assistance of our UL Lafayette liaisons, Adele Bulliard, and Kathy Rosenberg, for their efforts to disseminate the scholarship application to eligible schools and guide us through the selection process."