The University of Louisiana at Lafayette is mourning the loss of University alumnus and supporter, Donald Mosing.

Mosing graduated from the University with a bachelor’s degree in mechanical engineering in 1950. After college, Mosing began his engineering career at his father’s company, Frank's Casing Crew and Rental Tools. In 1989 he became president of the company, and under his leadership, the company grew into Frank's International, a global oil services company that is publicly traded, has approximately 3,100 employees, and provides services in nearly 50 countries on six continents.

Mosing was a critical part of the growth of UL Lafayette’s engineering program. In 2012, he gifted $2.83 million to the College of Engineering, which helped build the Frank and Jessie Mosing Endowed Engineering Student Career Development Program, in honor of his parents. In addition to this gift, the Mosing Family Scholarship Fund was created to provide educational support for the children of Frank’s employees who choose to enroll in classes at the University. In 2018, the scholarship provided support for 16 students. 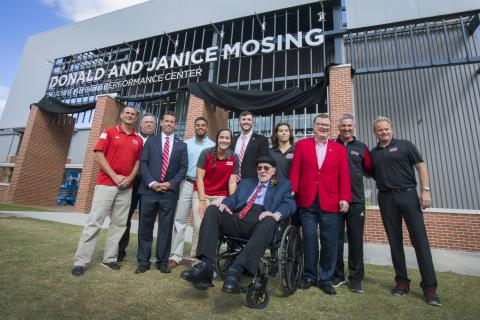 During his time as a student, Mosing was a decorated athlete in both football and track & field. His love for Louisiana Athletics led to the creation of the Donald & Janice Mosing Student-Athlete Performance Center (SAPC), which was dedicated in 2017. The SAPC is a more than 100,000-square-foot building that houses training and strength & conditioning facilities for all Ragin' Cajuns sports programs, as well as football offices. The Golf Indoor Teaching Facility at Oakbourne Country Club opened in 2017, as well, and was made possible by the generosity of many donors with lead gifts coming from Brad Mosing and matched by his father, the late Donald Mosing.

“Mr. Don Mosing’s heartfelt generosity has been felt by all of us at UL Lafayette,” said University President Dr. Joseph Savoie. “His legacy will continue in perpetuity, and we will forever be grateful for his friendship.”