Bolstered by the two largest philanthropic gifts in its history, the University of Louisiana at Lafayette raised a record $56.6 million in gifts and pledges in the past fiscal year.

“This historic sum is a 215% increase over last (fiscal) year and far exceeds the previous record set in 2017” of $24 million, Savoie said.

In March, the University and LHC Group announced a $20 million investment the Lafayette-based in-home health care services company is making in the College of Nursing and Allied Health Professions.

It is the largest single investment in an academic college in University history and “will have lasting implications for the college and the region’s health care landscape,” Savoie said.

“Among a host of benefits, the generosity of LHC Group will help make a new nursing and health sciences facility a reality. That, in turn, will strengthen the University’s role as the primary creator of the region’s health care workforce.”

In June, Louisiana Ragin’ Cajuns Athletics received the largest philanthropic gift in its history when Our Lady of Lourdes Regional Medical Center committed $15 million to secure the naming rights for Cajun Field.

The gift has helped jumpstart renovations to the home of Ragin’ Cajuns Football, the first widescale upgrades the stadium has received in its 50-year history.

“The new Cajun Field at Our Lady of Lourdes Stadium will provide a home for our football team that reflects its growing prominence and gives a new meaning to the Hail Mary pass,” Savoie said.

During his address, Savoie described the importance of philanthropy to the University, reflected on the historic nature of the past fundraising year, and expressed gratitude to the donors and friends whose support enables UL Lafayette “to meet its most essential needs.”

Philanthropy “offsets limits in state funding, delivers scholarship support for students, and provides resources to recruit and retain exceptional faculty members who strive every day to shape the future through the power of research and discovery.”

Savoie continued: “I’ve spent much of this year thinking and talking about history, and not just because of the times in which we live. Rather, I’ve engaged with history because – together, as a University and with the help of our community – we have made so much of it.”

The record $56.6 million UL Lafayette raised during the past fiscal year “provides incredible momentum” for a comprehensive fundraising campaign, the details of which will be publicly announced later this fall, Savoie said.

View materials related to the State of the University here. 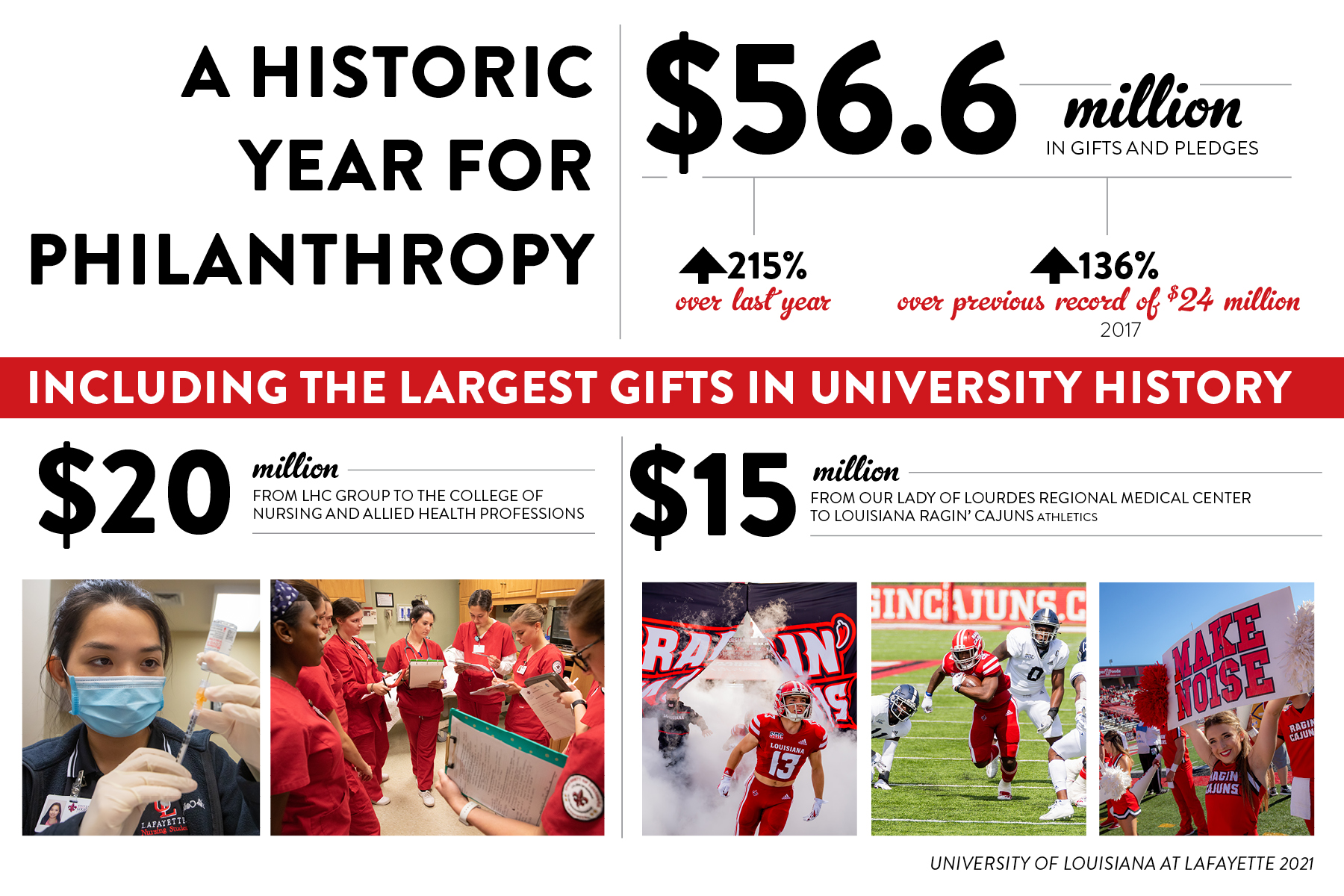