The South Louisiana Mid-Winter Fair Association, though known for putting on some of South Louisiana’s best rodeos, is doing much more than entertaining. Today the organization is responsible for funding University of Louisiana at Lafayette scholarships, professorships, and the upkeep of Blackham Coliseum.

The association began in 1939 out of the need for a facility to host livestock shows, basketball games, and civic exhibitions for what was then Southwestern Louisiana Institute. Members of the first board of directors included agriculture professors from the University and Dr. Joel Lafayette Fletcher Jr., who became the University's third president in 1941. Dr. Clyde L. Rougeou, who would eventually become the University’s fourth president, was also involved.

“Dr. Rougeou was one of my mentors and he was highly involved (in the association), so I was highly aware of the organization,” said Dr. Leon Labbe, a Mid-Winter Fair board member of 17 years and retired UL Lafayette professor of agriculture.

The first fairs were held in what locals knew as the Old Laundry Building near the University’s main campus. However, Dr. Fletcher soon realized that more space was needed, and worked with the state legislature to appropriate funds to build a new facility. The coliseum was built in 1949 and named after Stafford Morgan Blackham, who was head of SLI's Department of Animal Husbandry. 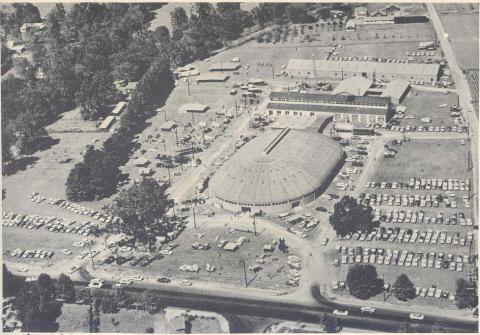 The Mid-Winter Fair Rodeo was born soon after, and for many years, the rodeo featured a parade extending from Johnston Street to Blackham Coliseum. At the end of the parade, the community would celebrate inside as they watched the rodeo. As the popularity of the rodeo grew, so did the proceeds. The board began to in students, faculty, and UL Lafayette facilities. The Agricultural Department was the first recipient of the proceeds, but as UL Lafayette evolved, so did the association’s giving.

“As a faculty member, for a long time, I administered the scholarships,” Labbe recalls. “That was a great honor and a whole lot of fun. It was difficult to decide between two equally deserving candidates. It was also beneficial for the board to have someone internal who was aware and could report out on scholarships.”

Falon Frederick is one of the students who benefitted from these scholarships.

“The support of South Louisiana Mid-Winter Fair Association has positively influenced my educational experience by validating that biology is the field meant for me,” Frederick said.  “Most scholarships require good grades, so receiving one helps to prove that I am doing something right."

The Mid-Winter Fair Association not only provides financial aid for students but also ensures that the Ray P. Authement College of Sciences faculty has access to quality training and resources.

Dr. Durga Poudel is an example of one of the 33 faculty members who have benefited from the association and its generosity since 2010. He states in Faculty Spotlight, “The generous support of donors like South Louisiana Mid-Winter Fair Association motivates me to keep up with my quality teaching and research as well as community service.”

For more than eight decades, the association has worked to advance UL Lafayette’s campus life through investments in the maintenance of Blackham Coliseum, athletics, students, and teachers. The South Louisiana Mid-Winter Fair Association board members have sacrificed their time to improve the University and continue to give back each year.